While it was interesting to see Zuckerberg getting back to his college roots, it comes as a little surprise to report that Meta has now decided to shut down her ‘Campus’ internal school network experiment.

Originally launched in September 2020, Campus was essentially designed to function in a similar fashion to Facebook Workplace, with separate, enclosed Facebook networks for each college campus, enabling better connection and community-building among students.

Membership to each campus network was only available to those with a verified college email address, and the idea was to create a social space for students to help keep them socially engaged, particularly during the pandemic.

But evidently, it hasn’t caught on as Meta might have hoped.

As explained by Meta (via TechCrunch)

“We’ve decided to end our pilot of Facebook Campus. We learned a lot about the best ways to support college students, and one of the most effective tools to help bring them together is Facebook Groups. We’ve notified students in the test schools that Campus will no longer be available, and have suggested relevant college Facebook groups for them to join. “

Those who have signed up to Campus are also now seeing this notification in the app: 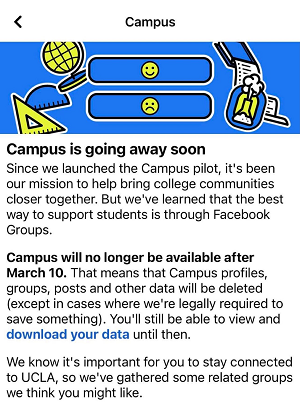 As noted, the closure is no big surprise, given that students already have a range of options to connect in various social apps, including dedicated Facebook Groups, while the fact that Campus is part of Facebook, which doesn’t have a great reputation for privacy, may have also played a part in its limited take-up.

According to TechCrunch, Campus has been made available in 204 US colleges and universities in total.

The closure will likely have limited overall impact on Facebook engagement, but it is interesting to note, in a broader context, how this aligns with Meta’s narrowing focus as it looks to the next stage of social connection.

Facebook has shut down almost all of its app experiments, which had been launched by its New Product Experimentation (NPE) team over the past few years, while it’s also now re-aligned the NPE team around a new goal of building for and with communities that have “historically been overlooked, underestimated, and undervalued by our industry”.

“We’re expanding from our current US footprint to build with and for communities across Africa, Asia, and Latin America, and scaling what works there across the globe. We need to be more intentional about building with proximity to how the world looks today, and how it’s going to look tomorrow. In time, this is how we’ll learn to identify universal experiences. “

The NPE team will subsequently be less focused on trends (ie identifying the next TikTok or Snapchat before it can gain traction) and more on understanding different communities, and the uses of social apps, and creating new economic opportunities in developing regions.

It seems that Meta is moving on from challenger mitigation, in line with its metaverse shift, which really is the big focus, in developing new apps and experiences that can tie into the next stage, as opposed to stemming the flow of users away to other apps.

In some ways, that could be seen as a concession, with apps like Snapchat and TikTok already gaining a foothold in its key market, and reducing its overall presence. But then again, Meta’s reach is unmatched, and with Facebook usage declining in developed markets, maybe now it makes more sense for Meta to focus on new uses, in new regions, as it looks to play a more significant role in the framework of the digital transformation in these nations.

Which will then enable it to connect more people into its metaverse experiences, and shift away from traditional apps.

That, overall, seems like the biggest impetus, re-aligning its development focus on the next stage, as opposed to tracking app trends and trying to beat out emerging players in the market.

Because the market itself is about to change, and within that, apps like Campus just won’t matter as much in a broader context.