Reddit is giving more users more insights into how their stats are performing, with its updated ‘Creator Stats’ dashboard now being made available to 90% of users via the desktop version of the app. 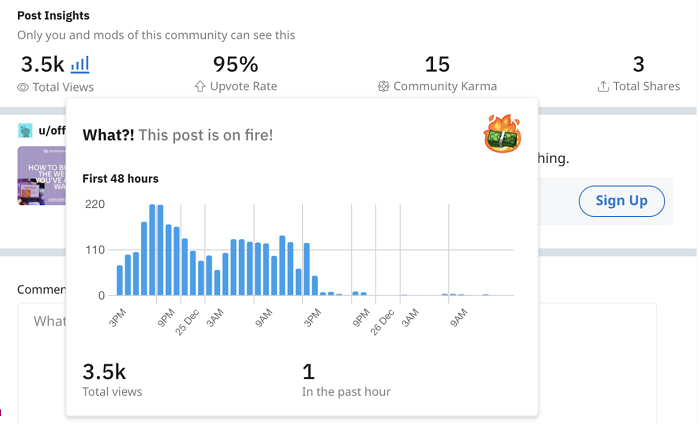 “Around three years ago, Creator Stats were available for Creators but due to scaling and performance issues, we disabled that feature. For the past five months, we opted 50% of desktop users and moderators into an experiment showing Creator Stats on eligible posts. We are excited to announce we are able to bring this information back! We have continuously worked to improve visibility into the posts made across the platform for Creators and Moderators.”

Creator stats will be made available after a post has received at least ten views, and will be viewable by the original poster as well as by moderators in each community (relative to where you post).

“This information will help moderators understand the type of content that can grow and develop their communities. Additionally, this can help users understand how well their post was received by the community. ”

The insights data will expire after 45 days, so there won’t be a major backlog of performance data available. But it could be a valuable, interesting addition for Reddit users, in order to get an idea of ​​who’s seeing their posts, especially users that are viewing their content and not voting or commenting.

The move is part of Reddit’s ongoing effort to upgrade and refine the platform in order to attract a broader audience, and maximize its revenue opportunities. Reddit has 52 million daily active users, and has undertaken significant work to clean up the platform, by removing its most controversial communities, while it’s also added new video tools and new ad options, in line with usage trends.

Ideally, that will eventually help Reddit shift habitual behaviors in the app, and make it a more attractive ad option – though it probably still has a way to go to in generating significant advertiser interest.

Perhaps, by providing creators with more insights into their performance, that will motivate more of them to post more often, while also helping moderators maximize their subreddits, which, in-turn, will improve engagement within each community, and improve its ad prospects.

Reddit says it hopes to bring these new analytics options to mobile apps in future.