TikTok continues to work on additional monetization avenues for creators, this time via expanded brand partnerships, with a new ‘Agency Center’ option appearing for some users, which, when activated, signals to talent agencies that you’re open to potential collaboration. 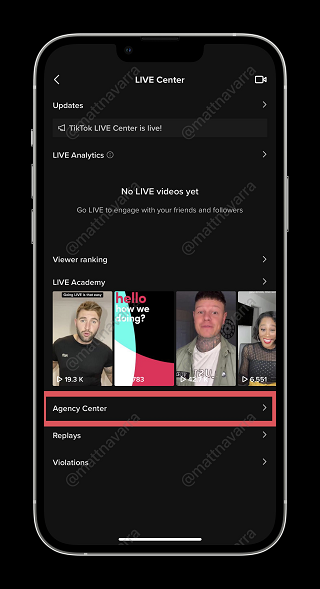 As you can see in these screenshots, shared by social media expert Matt Navarra, the new option is now available to some users within their TikTok account settings. Tap through to the ‘Agency Center’ and you’re presented with a single toggle which, when switched on, will enable your TikTok profile to be ‘searched and invited by any agency’. You can also withdraw your interest whenever you choose. 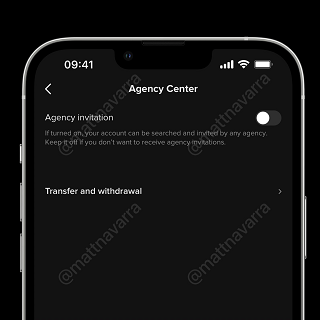 As noted, it’s another element in TikTok’s broader effort to facilitate monetization through brand partnerships, along the same lines as its Creator Marketplace tools.

TikTok’s hoping to create a more organic, simplified brand partnership ecosystem, in order to facilitate more monetization opportunities – because right now, top stars can earn a lot more money by posting to YouTube or Instagram instead. If TikTok wants to maintain its growth momentum, it needs to keep these popular users active – because if they stop uploading their content, and TikTok loses their engaged audiences, that, eventually, could be a disastrous blow for the app.

Because that’s what happened to Vine. Vine had hundreds of millions of users at one stage, and was the trending app of the moment among younger audiences, until Vine’s top creators, including King Bach, Logan Paul and others, called for a meeting with parent company Twitter to demand more money for their contributions, or else they’d take their content elsewhere. Twitter refused, mostly because it didn’t have an adequate monetization process in place for Vine clips, and thus, no money to give them, at least in a sustainable process. And eventually, those creators did move on to other apps, which then saw Vine usage plummet.

TikTok knows that this could also happen to its platform, and even though it’s now far bigger than Vine ever was, the vultures are circling, with both Meta and YouTube now offering bigger, more sustainable, more reliable monetization processes. And creators are indeed starting to question whether it’s worth them sticking around on TikTok at all.

It’s not at critical levels yet, of course, with TikTok still the trending app of the moment. But it will become a bigger question, especially as TikTok’s audience continues to grow, and that, inevitably, reduces payments from its static Creator Fund.

For smaller creators, that probably won’t matter, but if you rely on your uploads for income, and your TikTok payouts vary significantly each month, based on the whims of the Creator Fund program, that will become a problem at some stage.

Would that be enough of a problem to stop users from posting? Maybe. Reports have suggested that some big-name stars are now looking to meet with TikTok execs to address the situation.

That’s why TikTok is working hard to add in new monetization avenues and tools, and this new ‘Agency Center’ option could provide another pathway to establishing a more sustainable income stream for creators in the app.