Twitter has added another option to help increase the utility of Spaces, with some Spaces hosts now able to access full Spaces analyticsincluding the number of people that tuned-in, total speakers in the session, replays, duration and more. 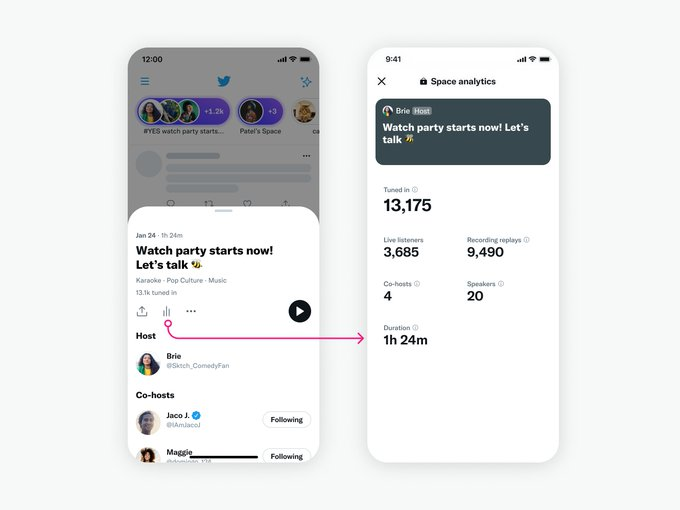 As you can see in this example, when a host taps on the graph icon (if available), they’ll be able to access the new Spaces performance stats, which provides a range of performance insights to help track your audio social efforts.

Which could be another way to make Spaces a more significant element in your broader tweet strategy. In many respects, it seems like the sheen has now come off the audio social trend, and it’s maybe not as engaging an option as some had thought it would become at the peak of the Clubhouse-led hype cycle. But even so, much like live-streaming before it, even if it’s not a major element, it could still be very useful, and there are various ways in which you could utilize Spaces to connect with your audience and build community.

Performance data adds to this, while Twitter’s also added replay stats for recorded Spaces as well as monetization tracking for ticketed Spaces, providing a range of options to help you manage and grow your Spaces approach.

Twitter also recently added Spaces clips as another way to raise awareness of your audio social broadcasts, and in combination, it’s gradually building out its Spaces offering with a range of helpful tools and options that could make it a valuable content pathway, depending on your audience .

The bigger question then is whether Twitter will continue to emphasize Spaces, and make it a bigger element – or will Twitter eventually scale back the option, as it did with live, if user interest doesn’t grow?

It’s impossible to say at this stage, but Twitter is still developing its dedicated Spaces taband it is looking at new ways to highlight more content on specific topics, which would also include Spaces promotion.

Twitter still evidently sees significant potential in the option, and as such, it could be worth experimenting with, and tracking your performance.